Robert Kiviat was the producer of the famous Alien Autopsy TV program and many other far-out programs. First, he profited from the extremely high ratings of the Alien Autopsy program, then he produced a program debunking his original alien autopsy, which also got high ratings. He also produced programs on prophecies, ghosts, and "Aliens on the Moon." Kiviat now is suing certain individuals and organizations for money that he says they owe him for his work on anti-gravity systems. 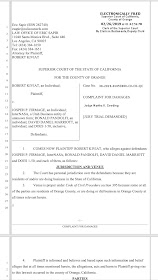 The first person named in the suit is Joseph Firmage, a onetime Silicon Valley multi-millionaire (now apparently former multi-millionaire) who might be said to have founded the first "To The Stars" venture with his International Space Sciences Organization (ISSO) in 1999, which lasted only eighteen months. According to American Antigravity,


In 2001, a California defense contractor built a small replication of the Nazi Bell device, and it produced effects just as Igor Witkowski and Nick Cook had reported on the original project. The Nazi Bell replication was built by SARA under funding from Joe Firmage’s ISSO startup, and developed around an applied engineering model of Einstein’s Unified Field Theory. In short, it was a modern attempt at a scale replication of the original Nazi Bell experiment, based largely on their interpretation of the original Bell design. The Nazi Bell replication is important because it offers validation for the research of Igor Witkowski and Nick Cook, but also because it demonstrates the application of theories proposed by Dr. James Corum and John Dering that offer explanations for not only the Nazi Bell experiment, but for the Philadelphia Experiment and the Hutchison Effect as well. In short, these are Unified Field Theory effects, which explains their strange side effects and unpredictable nature.

The Nazi Bell replication that Coruma and Dering participated in was related to WW-II German research, but the modern replication had been financed by Joe Firmage’s ISSO startup for about 1.2 million dollars, and wasn’t an exact replica of the original device. SARA’s version was much smaller (about 100 watts) and they’d modified the design, since they didn’t actually know many of the details of the original Bell’s construction (emphasis added).

The so-called "Nazi Bell" is a supposed prototype Nazi "super weapon" developed in secret during World War II. According to some, the Bell was the power source behind Nazi flying saucers. Of course, there is no real evidence that such a "Bell" ever existed, or that Firmage's ISSO built one.

In September, 2000, Firmage sponsored a by-invitation-only conference, Encounters at Indian Head, to look at the famous alleged UFO abduction of Betty and Barney Hill. This conference, in which I participated, was "secret" at the time, and was only "declassified," so to speak, several years later, when its proceedings were finally published.

Firmage teamed up at least briefly with Ann Druyan, the widow of Carl Sagan, in a venture, "One Cosmos." This sounds so much like To The Stars that it makes me wonder if they copied One Cosmos in their business plan. (At the time, I contacted Ms. Druyan to suggest that a partnership with Firmage might not be a wise idea, but she replied that she had her eyes open and was not too concerned.)


OneCosmos, under the leadership of Joe Firmage and Ann Druyan, is forming a new type of visionary alliance of partners in finance, science, learning, media, and entertainment to create an "integrated experience network." Our canvas is an Internet portal, a studio, and a press. With them, we aspire to demonstrate convergence of remarkable and responsible learning and entertainment.

Our success will be measured in three ways: commercially in return to our employees and shareholders, ideologically in our commitment to the intellectual and spiritual nourishment of humanity, and in the remarkable things the founders will do with their personal equity.

The venture was not financially successful. Some of Firmange's other weird ventures include ManyOne Networks, Intend Change, International Academy of Science and Arts (InterNASA), and Motion Physics, none of which seems to have been particularly successful.

Here is an excerpt from Firmage's presentation to a "Planetwork" conference in San Francisco back in 2003.


Our mission is about the possibility that we will be able to explore the Milky Way galaxy in an interstellar spacecraft within your lifetime. Our mission is about helping to enable a renewal of human civilization, and Nature as a whole.
Motion Sciences Organization is therefore truly a public enterprise and if we're successful, the proceeds yielded from technologies sponsored by Motion Sciences will be given back to humanity through select philanthropies. As a not-for-profit 501(c)3, our success in these missions will be dependent upon the support of visionary sponsors and citizens of Earth. People like you. We have a goal for the 2001 calendar year: engaging the support of 100,000 citizens of Earth, becoming members of the Motion Sciences Community...

The theoretical group within Motion Sciences has operated for two years as the California Institute for Physics and Astrophysics (CIPA), and is led by Dr. Bernard Haisch, formerly of Lockheed-Martin, whose work in this field is an outgrowth of NASA Research Contract NASW-5050, "Inertia and Gravitation in the Zero-Point Field Model" (1996-2000) awarded to the Lockheed Martin Advanced Technology Center. This contract in turn resulted from a seminal paper published in 1994 in the journal Physical Review A entitled: "Inertia as a zero-point field Lorentz force" by B. Haisch, A. Rueda and H. E. Puthoff. Based on work carried out at California State University at Long Beach, the Lockheed Palo Alto Research Lab, and the Max Planck Institute fur extraterrestrische Physik in Germany, a significantly new insight into the nature of mass was proposed in that paper. Thereafter, work under the NASA contract published in subsequent papers confirmed and indeed strengthened the proposed connection between inertial mass and the quantum vacuum. In recent years, the explorations of the relation between mass and the quantum vacuum have been extended with possibly significant insights into the nature of gravitation. Possible implications of this and of a rapidly widening body work in the domain of quantum vacuum physics are that: It may be possible to generate propulsive forces without the ejection of material propellant or reaction masses.

It may be possible to extract energy from the quantum vacuum. Both inertial mass and gravitational mass may be electromagnetic phenomena, which would open the door to the possibility of manipulating inertia and/or gravitation.

Note that the work of Hal Puthoff, "co-founder and Vice President of Science and Technology" of Tom Delonge's To The Stars Academy, is cited here. That 'free energy from a vacuum' (or "Zero Point energy") is one of his main claims.

More recently, Firmage claims to be developing an anti-gravity, faster-than-light propulsion system, and he has a video promoting it. It supposedly will provide not only anti-gravity lift, but faster-than-light travel. Suposedly the device entered functional testing in October, 2015. However, no further information about it has been released.


"because I had been investigating the latest anti-gravity research developments, I was amazed that Pandolfi definitely was supporting the activities of controversial UFO researcher and “Contactee” Joe Firmage. Firmage when approached, eventually offered me a position that would not only afford me the opportunity to document the supposed anti-gravity breakthrough Pandolfi was supporting. But also I’d be in a great position to determine its veracity” [said Kiviat].

Soon after Kiviat signed the employment contract with Firmage, Firmage expected Kiviat not only to plan a six month public roll-out of the device which Firmage was supposedly inventing, leading to a live demonstration; but Kiviat was also expected to develop and sell the network television series that would tell the Joe Firmage anti-gravity story, and also the story of the Aviary UFO history as seen through the eyes of Pandolfi. But it gets even better! Pandolfi, through his closest operative, also wanted Kiviat to tell the incredibly bizarre story of how his Pakistani wife allegedly from Kashmir, purportedly arrived on Earth via a “inter-dimensional portal,” and other tall tales which would be hard for even Hollywood to make up.

Kiviat has even started a GoFundMe page to "Help My Lawsuit To End Govt. UFO Secrecy." Kiviat's  GoFundMe page offers additional explanation of what this lawsuit is all about:


I began talking with a company called InterNASA, directly with its CEO (former Silicon Valley millionaire and entrepreneur Joe Firmage) who told me he was being backed by Ron Pandolfi, the aforementioned top CIA scientist.  Firmage also claimed to be on the verge of proving "gravity control" was a reality.

After Firmage had assured my attorney he had secured the necessary operating capital, I accepted a contracted employment position to run the company's news, PR and overall media division.  But when my dedicated work, covering many critical aspects of the company's activities, went unpaid for many months, and the prototype "gravity control" device stalled in development, I investigated and found out that Pandolfi - who ran something called the CIA's "weird desk" - has seemingly been orchestrating a disinformation operation all along known as a “flytrap” scheme,  where honest people's skills, talents, and in my case, considerable TV and media experience, are usurped and played with, somewhat maliciously, without any concern for proper financial compensation to those involved... Presently, [former Congressman] Marriott is only covering "technical improvements" on InterNASA's "gravity-control" device, motivated by Pandolfi, with the exception of a  $5000 payment to me which Marriott's lawyers now claim  was "just to be nice."


Since Pandolfi is essentially the one CIA science officer who’s also widely thought to be the keeper of America's most  guarded UFO secrets, I decided to file the civil lawsuit to not only receive the substantial contracted employment salary arrears InterNASA currently owes me - which I sorely need with one teenage son about to enter college and another soon thereafter -  but also use the vast power of the Court of law as a result of this legal action to get to the bottom of the UFO enigma and what our government actually knows.

In recent years, Firmage seems to have fallen on hard times. He continues to pursue business ventures, but apparently without a lot of success. Firmage was arrested for DUI in February 2011, in June and again in  November 2013, and in March 2014. In 2016 Joe Firmage and his mother filed for bankruptcy to avoid the sale of jointly-owned real properties. His venture Manyone Networks apparently did not pay its employees for about a year. Even if Kiviat does get a judgment against Firmage, it doesn't seem likely that he could collect very much.