The Source of "To The Stars" 'UFO Debris' Revealed - Art Bell!

So, we have finally nailed down the history of that supposedly anomalous sample of "groundbreaking metamaterials"  that "To The Stars" just yesterday made such fanfare of picking up for analysis. They said they got it from the well-known UFO personality Linda Moulton Howe. What they did not tell us, however, is that she got the sample from the late-night Titan of paranormal talk, Art Bell (1945-2018), who had received it anonymously in the mail. In fact, this particular sample of supposed UFO detritus was known in some circles as "Art's Parts."

The original web page for "Art's Parts" has long been removed, however, it is still visible via the mighty Wayback Machine. Here is a copy of that page from 2001.


The page contains the following letter, which Bell says he received anonymously on April 10, 1996:

I've followed your broadcasts over the last year or so, and have been considering whether or not to share with you and your listeners, some information related to the Roswell UFO crash.

My grandfather was a member of the Retrieval Team, sent to the crash site, just after the incident was reported. He died in 1974, but not before he had sat down with some of us, and talked about the incident.

I am currently serving in the military, and hold a Security Clearance, and do NOT wish to "go public", and risk losing my career and commission.

Nonetheless, I would like to briefly tell you what my own grandfather told me about Roswell. In fact, I enclose for your safekeeping "samples" that were in the possession of my grandfather until he died, and which I have had since his own estate was settled. As I understand it, they came from the UFO debris, and were among a large batch subsequently sent to Wright-Patterson AFB in Ohio from New Mexico.

My grandfather was able to "appropriate" them, and stated that the metallic samples, are "pure extract aluminum". You will note that they appear old & tempered, and they have been placed in tissue-paper, and in baggies for posterity.

I have had them since 1974, and after considerable thought and reflection, give them to you. Feel free to share them with any of your friends in the UFO Research Community.

I have listened to many people over the years discuss Roswell and the crash events, as reported by many who were either there or who heard about it from eyewitnesses.


The recent Roswell movie, was similar to my grandfather's own account, but a critical element was left out, and it is that element which I would like to share. 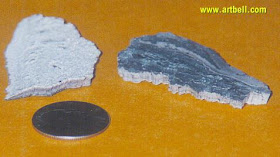 As my grandad stated, the Team arrived at the crash site just after the AAF/USAF reported the ground zero location. They found two dead occupants, hurled free of the Disc.

A lone surviving occupant, was found within the Disc, and it was apparant, it's left leg was broken. There was a minimal radiation contamination, and it was quicky dispersed with a water/solvent wash, and soon the occupant was dispatched for medical assistance and isolation. The bodies were sent to the Wright-Patterson AFB, for dispersal. The debris was also loaded onto three trucks which finished the on-load just before the sunset.

Grandad was part of the Team that went with the surviving occupant. The occupant communicated via telepathic means. It spoke perfect english, and communicated the following:

The Disc was a "probeship" dispatched from a "launchship" that was stationed at the dimensional gateway to the Terran Solar System, 32 light years from Terra. They had been conducting operations on Terra for over 100 years [emphasis added].

There is much more following this, and all of it sounds pretty loopy.

Here is a transcript from 1996 of Art Bell discussing this supposed debris with Linda Moulton Howe. Lots of hazy claims, but nothing specific. Here is Bell's preliminary analysis of Art's Parts, which really doesn't tell us much.

So the debris that is now being analyzed with such fanfare by "To The Stars" is supposed to be from the alleged Roswell crash. It was sent anonymously to Art Bell, who gave it to Linda Moulton Howe to analyze, who later gave it to Tom DeLonge. Science marches on!!