'British UAP Sightings Now Online' - Another Facepalm for To The Stars

On March 6, 2020 the following image was posted on To The Stars' Facebook page:


TTSA writes, "British #UAP sightings dating back from 1950s to 2009 will be shared publicly for the first time, according to the British Royal Air Force. This recent Interesting Engineering feature details what can be expected." The posting links to an article claiming, "British UFO Sightings Will Be Published Online for the First Time Ever," and is illustrated by a fake photo of a flying saucer hovering over London's Tower Bridge.  In it we find the omnipresent Nick Pope, who claims to have once run the "MOD UFO Project," 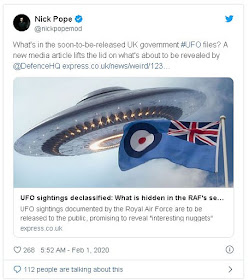 I knew that couldn't be correct. I had written back in 2013 that

On June 20, 2013, news outlets reported that the British Ministry of Defense, which closed down its UFO Sightings desk in 2009, had just released the very last of its UFO files into the public domain.   You can read the files here. [original URL changed, fixed here].

In fact, the sightings were first published on 4 December 2007. Somehow TTSA didn't get the word. As I have said before, DeLonge, Elizondo, and their crew are Babes in the Woods in matters of UFOlogy and UFO history.


To be sure, I contacted Dr. David Clarke about TTSA's claim. Clarke is a former reporter and currently course leader and senior lecturer in journalism at Sheffield Hallam University teaching media law and investigation skills. His Ph.D is in Folklore from the National Centre for English Cultural Tradition, University of Sheffield. From 2008-13 he acted as consultant and curator of the MoD UFO files project with The National Archives.

Dr. Clarke replied that "The story is complete nonsense," and referred me to his Blog entry of January 29, 2020, where we read:

Self-styled ‘former head of the [non-existent] British government UFO project’ Nick Pope is quoted by the MailOnline as saying he is pleased the public are going to be given an insight into ‘our work on these real-life X-files‘.

Sadly nothing could be further from the truth. As the MoD have made clear on numerous occasions, no work has been done on these ‘real life X-files’ since the admin office that logged calls was cut in 2009. ....  there is definitely nothing remotely ‘top secret’ being hidden away within these records and, as this link to MoD UFO reports 1997-2009 proves it is also not the first time – as incorrectly claimed – the UK MoD has made this type of material available online.


There is nothing remotely top secret in the records it's just a list of FOI requests and emails from people reporting lights in the sky. Nick Pope has made a tidy living out of hyping this kind of story and then promoting himself to the media as a former British government UFO investigator. He was just a desk officer who answered letters about UFOs for three years during the '90s and was never in charge of anything There was never any such thing as a 'British Government UFO project'.


He included the following document drafted by the MOD, in response to an inquiry about UFOs from a Member of Parliament. It states, "The MOD has never operated anything described as 'The UFO Project'," adding "Mr. Pope elected to describe his position as the "Head of the MOD's UFO Project," a term entirely of his own invention." 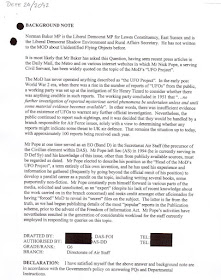