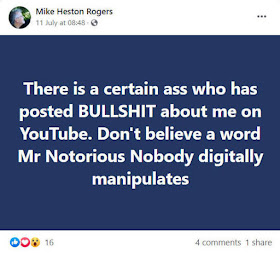 My, how quickly things have been happening! On July 3,  I wrote about how "Crew Chief Mike Rogers Confesses the Travis Walton Hoax!," which contains a recorded confession of the hoax by Rogers. Normally, you'd think that would settle the matter, but that's not how things work in UFOOLogy. Soon, Rogers was claiming on his Facebook page and elsewhere that documentary producer Ryan Gordon, who made the recording, had digitally altered it, to fake his statements. Of course Gordon objected to this, noting that it accused him of a felony, which was quite injurious to his reputation. Mike agreed to retract the accusation, provided that Ryan acknowledged that Mike retracted his 'confession'. Both agreed, and peace was restored, temporarily.

Then the 45-year-old Walton yarn received another body blow recently when Charlie Wiser, a woman in Australia who nobody in UFOlogy seems to have heard of until about two weeks ago, put together a website demonstrating a prodigious amount of research and attention to detail, as well as a saucy sense of humor. It's called ThreeDollarKit, and it's only a few months old. Only two cases are covered in detail: Betty and Barney Hill, and Travis Walton.

Drawing upon maps and photographs provided by Ryan Gordon, she convincingly argues that Travis and Mike, assisted by at least one or two confederates (probably including Travis' brother Duane), used the existing Gentry fire tower along Rim Road in the forest to first, simulate a UFO, with a powerful searchlight to "zap" Travis, and second, hide Travis away for five days while he was supposed to be on board a "saucer". (There is an apartment inside the tower, for the watcher to stay during his shift, which apparently was five days!) The other five woodcutters had no idea what was going on - but Travis needed them to be there as witnesses. Charlie writes,

She goes through a whole lot of details, to explain pretty much all of the Travis Walton yarn. If you're interested in this case, I recommend going through it carefully. It's very credible.

But then on July 16, the Travis Walton story suffered probably its greatest meltdown yet. Mike Rogers agreed to be interviewed by Erica Lukes on her weekly show, UFO Classified. He was supposed to appear via video, but for some reason he didn't (Rogers has done video interviews in the past). Poor Erica had to hold her cell phone, using its own speaker, up to the microphone. She also invited Travis Walton to comment or join in, but received no reply (Walton has previously appeared on her show).

It started out pretty slow. She asked Mike to talk about himself, his family and his background, etc. Gradually guiding the conversation back to the incident, Mike repeated the familiar story as it has always been told. He affirmed "one hundred percent" that there was no hoax. However, he later added "I didn't actually see Travis abducted," which leaves him quite a bit of wiggle room. Then he said, I used to believe Travis, but now I'm starting to have my doubts. That started about ten years ago.
The revealing part of the podcast was when Mike began to badmouth Travis Walton, his friend for lo these many years. Earlier, when asked on his Facebook page whether Travis was telling the truth about the 'abduction,' Mike gave him this ringing endorsement: "I have no connection to what Travis Walton says or doesn't say. He is on his own with whatever he says" (July 6).
Mike complained that Travis has been trying to keep him 'out of these things' (i.e., the profit from the abduction story) 'for the last thirty years.' The "rift" happened in the year 2000, he said (which was, of course, only 21 years ago). Travis, he says, has an agreement with him to give him 35% of the proceeds in book sales. But "he hasn't paid me a cent!" Mike's sister Dana married Travis decades ago, although they are no longer together. She left him nine years ago. My sister Dana owns the house Travis lives in, said Mike, and if I took Travis to court, I would win, and I'd take his house.
On the subject of that house, Mike began to talk about how the house and its yard are now filled with trash, because Travis is a terrible hoarder. (This is indeed true. I have jokingly suggested that Travis should have an episode about him not on a UFO series, but on Hoarders.)  Mike decried the terrible state of that property, adding that it never looked like that when Dana lived there. (The following day, Mike posted photos of Travis' junkyard-house on his Facebook page, shaming the resident without naming him. This confused many people.)
Mike, who is 74 years old and walks with a cane, nonetheless boasted about his pugilistic abilities. He told how some Mexican guy came up to him speaking Spanish, and was allegedly on drugs. I belted him, Mike boasted. "I've never lost a fight." 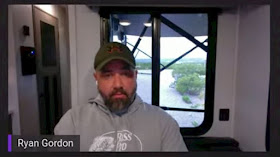 At this point almost two hours had passed, which is the normal length of the podcast. Mike's interview was finished But Ryan Gordon, the producer whose investigations of the Walton case have stirred up the current whirlwind, was calling in, and after some brief difficulties they patched him in, via video.
The program then went on for another two hours. "This is the longest interview I've ever done," said Erica. Ryan explained the story behind Mike's once-disputed (and now retracted) "confession," showing texts preceding it that leave no doubt as to its authenticity. Asked by Erica if he thought any of the persons involved would ever confess making a hoax, Ryan replied, "If my checkbook was big enough." The purpose of the hoax, he explained, was to try to win the National Enquirer's $100,000 prize for proof of alien life. They did not win that, but they did win the Enquirer's Best Case of the year award.
Ryan then showed maps, and photos he had taken of the area involved the incident,  including dramatic drone footage. He showed how Rogers misled the searchers, bringing them to a site near the Turkey Springs work site, about five miles from Travis' actual location in the tower. I won't try to summarize everything Ryan said here, I strongly encourage interested persons to listen to all two hours of the interview with Ryan.
Less than 24 hours after that podcast, it is still making waves and generating a lot of comment. I predict we will be hearing a lot more on this matter in the near future.
(Indeed we are - next update.)